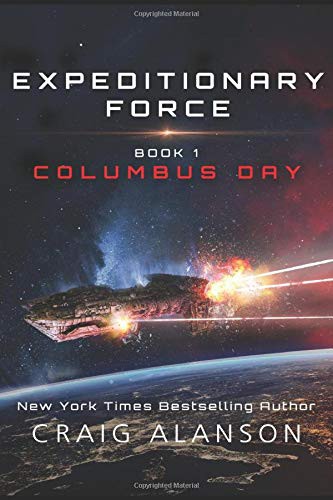 This is the first book in the Expeditionary Force series - one that I hadn’t yet heard of at the time.

Although it’s sci-fi, the book is set in the modern-day. Earth gets invaded by far more technologically advanced aliens and humanity suddenly finds itself playing along as the lowest echelon in a war involving many different levels of alien capability. The mostly-powerless humans need to work out which side they should be fighting on.

The book is humorous and full of comments from pop culture and classic “humanisms”, which often confuse the various non-human characters encountered. The story is told from the perspective of Joe Bishop - a former US Army soldier - who inadvertently finds himself pretty much at the centre of all that goes on. His character is a little rough around the edges but the reader quickly relates and warms to him.

As far as the story goes, I found the first third or so to be a bit of a drag whilst the scene is set. However, it soon ramps up and it became very hard to put down once the main story began to kick-in.

There’s a great mix of excitement, action, comedy, drama, and tragedy. It’s a book I can definitely recommend to those that enjoy action or more light-hearted sci-fi.

The book ends on a note that paves a clear pathway to sequels and the rest of the series, and I look forward to reading them further!